What are Biryani, Pulao and Tehri 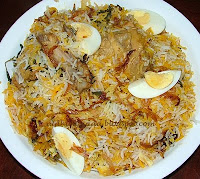 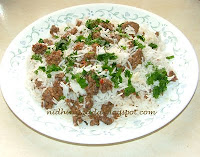 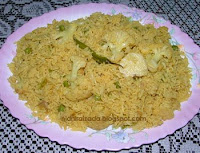 Aloo, Matar, Gobhi Ki Tehri
Biryani, Pulao and Tehri, belong to a family of primarily South Asian rice dishes made with spices, rice (usually basmati) and meat/vegetables. Since their method of preparation is different, their outcome is also different.

What is Biryani?
Biryani is primarily a rice dish, made with meat/vegetables, spices and rice (usually basmati). Biryani originated in Persia and might have taken couple of different routes to arrive in India.

Traditional Biryani:
In the olden days, rice was fried (without washing) in Ghee (Clarified butter). It did two things: it gave rice a nutty flavor and secondly it burned the outside starch layer gelatinizing it.

After the rice is stir-fried, it is boiled in water with spices until half cooked. The meat is marinated in a paste of Papaya, with whole-milk yogurt and spices. Thereafter, the meat may be cooked.The rice and meat are layered in an earthen pot called Handi, with bottom and top layer always of rice. An interlayer of some condiments may be introduced between meat and the rice. The spices and condiments used in biryani may include, but are not limited to, cloves, cardamom, cinnamon, bay leaves, coriander and mint leaves, apart from ghee, ginger, onion, garlic and yoghurt. The premium varieties include Screwpine (kewara) essence, saffron and rose water may be added to give flowery and herbal aroma. The Handi is sealed and put on the coal embers to cook.

For a non-vegetarian biryani, the main ingredient that accompanies spices is the meat (or beef), chicken, goat, lamb or shrimp. Vegetable Biryani is also equally popular.

The biryani dish is served with Dahi Chutney or Raita, Korma, Curry or a sour dish.

Basically, it has three steps:

First, the meat is seared in ghee and cooked in water with warm aromatic spices until meat is tender. The meat broth is drained out.

Second, the rice is lightly fried in Ghee and cooked in the meat broth from the previous step.

Third, cooked meat and cooked rice are layered in a Handi. Sweet flavors are added. The Handi is sealed and cooked over low heat. The result is a perfectly cooked meat, rice, and a homogenous flavor of aromatic meat broth, aromatic spices and sweet flavors.

Hyderabad Biryani:
Hyderabadi Biryani is one of the most popular versions of non-vegetarian types, especially in India and the Middle East. The Nizam’s kitchen boasted of 49 kinds, which included biryani made from fish, quill, shrimp, deer and hare.

This is called ‘Kutchi Biryani’. Kutchi means ‘raw’. The process does not adhere to the name Biryani in Persian meaning 'fry before cooking'. Neither the meat, nor the rice is fried before cooking. The meat is marinated in a mixture of spices for a few hours. Meat and the meat marinade are put in Handi. The rice is mixed with spiced yogurt. The 'rice and yogurt mixture' is put on top of the meat. The Handi is sealed and cooked over low heat. Eventually, the meat and rice are Dum cooked.
Pukki Biryani is the common type of hyderabadi biryani prepared at homes in India.

In theory, Hyderabad Biryani is simple to make, but requires a lot of experience. The variables are complicated such as amounts, moisture of yogurt mixture and marinate, and cut of meats. All the variables have to be carefully balanced so everything will cook together and come out perfectly.
Recipe of :
Sindhi Biryani:
The Sindhi variant of biryani is very popular in Pakistani cuisine. In the most popular version of Sindhi Biryani, meat is fried with potatoes, tomatoes and pulp of apricots and this meat mix is then layered with rice.

Malabar Biryani:
Malabar chicken biryani is very popular in Kerala. For Calicut Biryani, the Handi is placed on the embers produced by coconut shell. The seal is broken only when ready to serve.

In Iran, this dish is made in Isfahan with baked lung and mutton that is minced and then cooked in a special small pan over the fire. The food is generally eaten with a type of bread, "nan-e taftton".
In Myanmar, Biryani is known as Danpauk. Locally grown rice is used for the preparation. Thai Muslims prepare it with local ingredients.

What is Pulao?
Pulao also called Pilaf, is a dish in which a grain, such as rice or cracked wheat, is browned in oil, and then cooked in a seasoned broth. Rice and meat/vegetables are not layered while cooking. It is of Persian origin.

Depending on the local cuisine, it may also contain a variety of meat and vegetables. Pulao and similar dishes are common to Middle Eastern, Central, South Asian, Latin American and Caribbean cuisine.

Traditional Pulao:
Long grain rice is soaked in water. In the meanwhile, the meat fried in Ghee and cooked with aromatic spices in a plenty of water. After the meat is cooked, plenty of broth is left. More water and pre-soaked rice are added. It is boiled and heat turned down to simmer. The rice is basically cooked in meat broth. Nuts like Almonds, Cashews, dried fruits like raisins or apricots may be added. The aromatic spices especially Cinnamon, Nutmeg, Cloves and Bay leaves are used.

For vegetarians, plain water and aromatic spices are used to cook Vegetables and Rice together. Generally, dried fruits and fried nuts are added. In North India, normally Pulao refers to a Vegetarian Pulao.

Tehri is the name given to the vegetarian version of the rice dish and is very popular in North Indian and Pakistani homes.

Tehri was made with Potatoes and Rice but other vegetables may be added. The dish is Dum-baked in sealed Handi. A garnish layer is added to the top. Tehri is made to taste better with accompaniments such as Raita (yogurt ), Achar (pickle) and Papad.

In Bangladesh, Tehri refers to Biryani prepared by adding the meat to the rice, as opposed to traditional Biryani where the rice is added to the meat.
Recipe of:
Difference between Biryani, Pulao and Tehri:

In Biryani, boath the meat/vegetables and rice are cooked separately and then they are layered and baked during cooking. The process also lives up to the name Biryani in Persian meaning 'fry before cooking'.

In Pulao, the 'meat/vegetables and rice are stirred' before cooking and both are cooked together without any layer formation.

Tehri is a vegetarian dish prepared by cooking rice with potatoes. Other vegetables may also be added to it. It is common in Uttar Pradesh, India.
Posted by Nidhi Raizada at 9:52 AM

Labels: Do You Know

Nidhi and Aazia, this is absolutely amazing information to me. I am a big DIE HARD fan of Biryani and Pulao and I can eat it anytime during the day. I cook a lot and I make Biryani all the time but I cheat by using Shaan masala for flavoring. I use the Kacchi Biryani method and it does turn out really good but I am trying to learn and master this by using home made masalas. Nidhi, I was surprised to learn that there are about 30 styles of Biryani and I just hope I can master few of them. I have never had Tehri (Tehari) so that is something I will look forward to. My ultimate goal is to open a restaurant in US that primarily serves Biryani :). Thank you Nidhi for writing this and all that information and thank you Aazia for you contribution. Long Live Biryani :).

All the Best for the restaurant bhs87....

Nidhi, very informative! These days when anyone can publish whatever they want on the blogs, it is nice to come across someone who has researched and tried to present authentic facts and recipes.

Learnt so many things about biriyanis! Thanks for sharing your knowledge.. :)

This is so useful! Finally a source to explain the difference between lucknow biryani n Hyderabadi n why the former is more delicious. Thanks!

Thank you Nidhi... It was informative.

Visit My Other Blog

Nidhi Raizada
Monmouth Junction, NJ, United States
Not too long ago, I was a working mother raising three kids and struggling to keep up with the varied food choices of every family member. I was able to meet the demands with lots of planning for the meals ahead of time. According to me it is very important to follow the recipe, which skillfully combines healthiest ingredients and uses appropriate cooking techniques so that food retains color, texture, taste, nutritional properties and appetizing aroma, helping to get our digestive juices flowing before the meal even starts. Most of the ingredients used in the recipes in this blog are tailored to suite my family’s demands, so if you like any of my recipes, please adjust the ingredients and quantities according to your taste and try it out with love, believe me you will be able to prepare a wonderful meal dish.

The images and content of www.nidhiraizada.com and www.raizadanidhi.com are copyright protected unless otherwise noted and are not permitted to be used/distributed/reproduced/published/broadcast without the prior written permission of Nidhi Raizada. All rights reserved.